This famous quote comes from Stravinsky, right? Or was it Picasso? T.S. Elliot? Or all of the above? (stealing this quote from each other, of course!!)

Much earlier, Thomas Jefferson wrote, “He who receives an idea from me, receives instruction himself without lessening mine; as he who lights his taper at mine, receives light without darkening me.”

Sources of creative inspiration and the processes of learning itself are subject to influences from experiences across one’s entire lifetime. So much is subliminally processed or assimilated that it cannot always be ascertained if creative borrowings truly cross the boundaries of plagiarism or fraud or are instead just a kind of psychological disorderliness.

“Cryptonesia” is the term used to describe unconscious copying. “When people engage in creative activity, they are so involved in generating or coming up with something new or novel that they fail to protect against what they previously experienced," according to a leading researcher Richard L. Marsh, a professor of cognitive psychology.

The music world is no stranger to this phenomenon. Our Taking Inspiration chamber music concert on April 30 explores and celebrates the genius of one of classical music’s most notorious kleptomaniacs, George Frideric Handel.

For this concert, we take delight in juxtaposing works by Scarlatti, Telemann, Rameau and Kaiser with those of Handel — it seems that Handel was clearly influenced by beautifully-turned melodies and ear-catching motifs by these colleague composers. Listeners will hear the origins of Handel’s “Hallelujah Chorus” from Messiah in a fugue by Corelli, a Telemann concerto for three violins that sparked Handel’s lovely and lively Adagio and Allegro for flute and strings, HWV 338, and one of Rameau’s Pièces de Clavecin en Concerts for harpsichord, flute, and violin, a movement of which appears to have been admiringly imitated in Handel’s overture to Joseph and his Brethren.

Join us on April 30 at Harvard-Epworth Church in Cambridge or watch the livestream online to experience these and more delights and to ponder the questions of the workings of the creative subconscious! 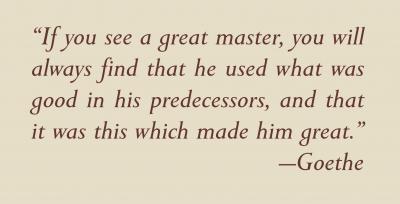