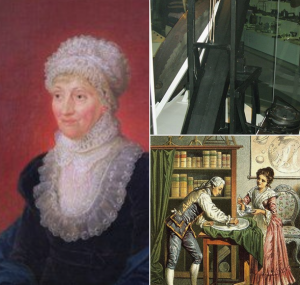 The musician/astronomer Caroline Lucretia Herschel was a younger sister to William Herschel, one of the featured scientist-composers for our “Stars in Their Eyes” program. Like her older brother, she was also an accomplished musician, playing harpsichord and performing as a vocal soloist for the oratorio concerts her brother organized in Bath.

Born in Hanover, Caroline was struck by typhus at the age of ten, which stunted her growth—she never grew taller than 4 feet, 3 inches. After her father’s death, she journeyed to England in 1772 to join William who had been sent there earlier by their father for refuge. She managed William’s household affairs, participated in his music-making activities, and eventually began assisting him with his work in astronomy as that interest came to the fore and began to dominate his career path.

Although she worked with William throughout her own career as an astronomer, eventually she developed more independence in her research pursuits and is credited with the discovery of several comets. She was the first woman to receive a salary as a scientist and was the first woman to be awarded a Gold Medal of the Royal Astronomy Society (1828). The King of Prussia presented her with a Gold Medal for Science on her 96th birthday (1846). She lived to be 97 years old.