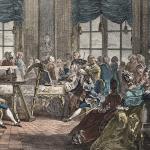 An exploration of the life and musical interests of Thomas Jefferson during the time he was in Paris in the 1780s, serving as a trade minister for the fledgling United States. This episode features varied instrumental selections by five prominent composers whose works Jefferson is known to have heard. Video version includes beautiful period paintings and illustrations of 18th-century Paris and of the fascinating featured personalities in this episode.

A video version of this episode can be seen here