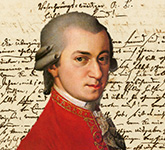 This podcast episode brings to life the music scene in Mannheim in 1777 where the 21-year-old Wolfgang Amadeus Mozart had ventured with his mother with the aim of developing his career. The extensive correspondence between family members richly reveals the cultural scene in Mannheim. We tell this story through a sampling of musical works by Mozart and his composer colleagues and selected readings from the family missives.

Written, narrated, and produced by Suzanne Stumpf and Daniel Ryan

Update Required To play the media you will need to either update your browser to a recent version or update your Flash plugin.